Famous Players Who Got Their Start in Futsal 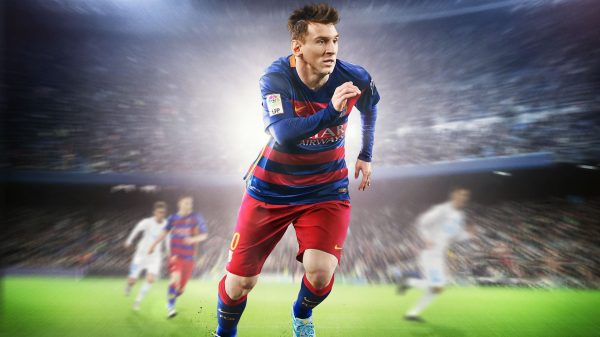 “If it wasn’t for futsal, I wouldn’t be the player I am today”.

Hard to imagine a better endorsement for our game than these words from 3-time FIFA World Player, Lionel Messi. However, Messi’s not the only player to owe a great debt to 5-a-side and Futsal soccer. The prestigious Futsal alumni includes Pele, Cristiano Ronaldo, Xavi, and Ronaldinho, and that’s but a mere sliver of the talent that Futsal helped produce.

Close quarters and continuous play combined with small pitches make for a perfect training ground in control and stamina, and while not all these players had the advantage of a facility like Ultimate Soccer, they found their pitches in the streets or indoor centres and nurtured their skills to take the world stage. Below we look at some of the best players to ever grace the world game who got their start playing Futsal.

Argentinian Lionel Messi, the star forward and all-time leading scorer for Barcelona owes plenty to Futsal in shaping his impressive career. Overcoming a growth hormone deficiency and taking the pitch for Barcelona at only 16, it was his time at Newell’s Old Boys Futsal club that gave him the “speed and relentless attacking style” that has become synonymous with his playing style. Messi himself fondly recollects his time at the Rosario based club; “as a little boy in Argentina, I played futsal on the streets and for my club…it really helped me become who I am today”. To pay homage to where he got his start, Messi funded the construction of a new gymnasium and dormitory in 2012 for Newell’s.

Widely considered the best player of all time, Edson Arantes do Nascimento, known as Pelé, is the highest scoring player in history. He’s won an incredible amount of awards including World Player Of The Century, Football Player Of The Century, FIFA’s Ballon d’Or Prix d’Honneur (Golden Ball), and a placement in Time’s 100 Most Influential People of the 20th Century. Growing up in poverty, Pelé had to start with stuffed socks or a grapefruit as a replacement for a soccer ball he could not yet afford. In his mid teens he joined a Futsal team called Radium in his home town of Bauru. He recalls “it’s a lot quicker than football on grass. You have to think really quickly because everyone is close to each other”. At the age of 14 he was allowed to compete with adults and quickly ended up top scorer, citing “that gave me a lot of confidence. I knew then not to be afraid of whatever might come”.

Portuguese superstar Cristiano Ronaldo is another legend that got his start in Futsal. Generally accepted as the best player in the world currently, Manchester United legend George Best famously quoted of Ronaldo; “there have been a few players described as ‘the new George Best’ over the years, but this is the first time it’s been a compliment to me”. Growing up in the neighbourhood of Funchai, Madeira, Ronaldo says, “during my childhood in Portugal, all we played was futsal”. The Manchester United & Real Madrid forward claims the “the small playing area helped me improve my close control…if it wasn’t for futsal, I wouldn’t be the player I am today”. Praise from players, coaches, and official institutions have followed Ronaldo through his impressive career, and it all started with Futsal.

Spanish all star midfielder, Xavier “Xavi” Hernandez Creus was the first player in Barcelona’s history to play 150 international matches and is considered one of the best midfielders of all time. Joining La Masia, the famous training academy of FC Barcelona, at 11yrs old, he now calls Qatari club Al Sadd home. When discussing the benefits of futsal with UEFA he states, “perhaps in regular football you cannot appreciate the talent. Everything is more physical. But in futsal you have small details of quality, class and tactical aspects”. It’s a sentiment that’s echoed by many in this list. It also drives home the point that with full field soccer, physical stamina and endurance are as important as control & strategy, but with futsal, close control, speed and dexterity reign supreme.

Much like Pelé, Ronaldinho (real name Ronaldo de Assis Moreira) grew up in a poor neighbourhood and turned to 5-a-side Futsal matches in the street from the age of 7 to hone what would later become his signature playing style, which is characterised by a remarkable close control of the ball. Discussing his time playing Futsal, Ronaldinho says “a lot of the moves I make originate from futsal…it’s played in a very small space and the ball control is different [to regular soccer]…to this day, my ball control is pretty similar to a futsal player’s control”. Barcelona teammate, Eiður Guðjohnsen, sums up Ronaldinho’s famous control, saying “when you play with him and see what he does with a ball, nothing surprises me any more. One of these days, he will make the ball talk”. From futsal in the streets of Porto Alegre to the world stage, the attacking midfielder has represented Brazil in over 97 matches, scoring 33 goals, and has had an incredible career across clubs Gremio, Paris Saitn-Germain, FC Barcelona, Milan, Flamengo, Altetico Mineiro, Queretaro and Fluminense.

Sao Paulo native, Neymar (Neymar da Silva Santos Júnior), made waves by winning 4 consecutive Player of the Year awards by the time he was 21, and as with the players already discussed, Neymar joins the ranks of world class players that honed their craft in the streets of Brazil, and in futsal centres. Speaking to UEFA, he notes that “futsal helps a lot because you need to think quickly. It’s a more dynamic game and today in Europe there’s not much space so you need to think quicker”. Neymar is currently the forward/winger for FC Barcelona and is considered one of the sport’s greatest rising stars.

Aston Villa captain and star centre back, Micah Richards, claims that it’s futsal that taught him how to turn defence into offence. Growing up in Leeds, Richards got into futsal after being told that it would help his close control of the ball: “We used to train with smaller balls and used to have to learn tricks and stuff like that…[it helps] with your touch and technique so that when it comes to playing with a bigger ball it is a lot easier…it helped my attacking and being comfortable on the ball going forward and trying to drive into positions”.

Looking to get the same start as these stars?

Ultimate Soccer offer a state-of-the-art facility with dedicated 5-a-side futsal pitches. Offering 5-a-side tournaments, leagues, and coaching, Ultimate Soccer is Sydney’s premier futsal destination. Hone your close quarters ball control and learn to think quickly and tactically, while having an absolute blast with friends, family, and colleagues. Get in touch with our friendly team today and see how you can get started with futsal.

<< The Best Food to Eat Before Playing 5-a-side SoccerWhat's The Difference Between 5-A-Side & Futsal? >>

Ultimate Soccer's phone lines are now open 9-5pm Monday to Friday. We are taking bookings for fully vaccinated customers from the 11th of October onwards.

We've been busy during lockdown and have started construction on our second 7-a-side pitch, we are currently taking block bookings now for the opening date in December.

Summer Soccer will be running and kicks off from the 25th October for Mens, Womens, Mixed & Juniors.

As a reminder, currently only fully vaccinated customers are allowed into the facility, proof of full vaccination is required prior to entry.

No double vaccination proof, no entry, no excuses, no exceptions.

Thank you for your cooperation.
Ultimate Soccer Management Team